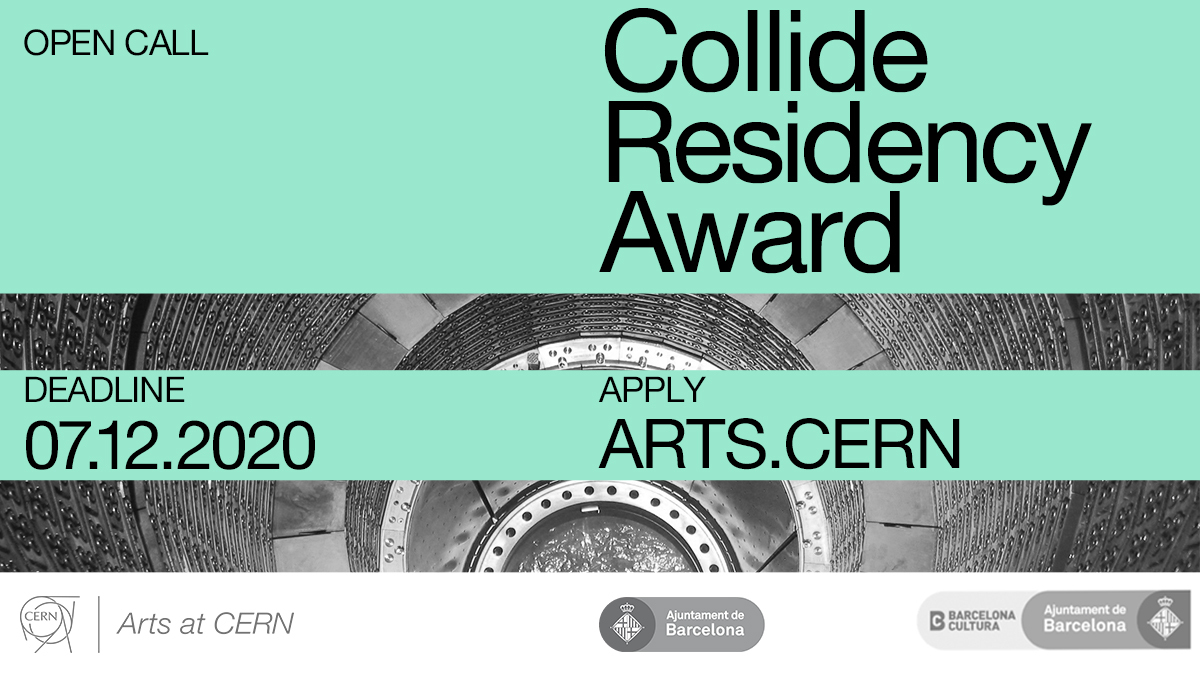 Open call for the new edition of Collide residency award

CERN is announcing an international call for Collide, its flagship programme consisting of a residency award of up to three months divided between CERN and the city of Barcelona. For its second edition, Arts at CERN and Barcelona are joining forces again, as part of the on-going collaboration between CERN, the Institut de Cultura de Barcelona and Barcelona City Council.

Artists from across all creative disciplines and from any country in the world are invited to apply. Proposals should include a description of their artistic practices and interests and their perception of science and of how CERN scientists and engineers are pursuing the big questions about our universe.

The selected artist or collective will receive a three-month fully funded residency award allowing them to pursue their art project. They will spend two months at CERN working side by side with particle physicists, engineers and IT professionals, and one month at Hangar, a centre for art research and production in Barcelona. Collide seeks artists who are inspired by scientific ideas and technology concepts and interested in innovative discourse in their artistic expression. The detailed selection criteria can be consulted here.

Arts at CERN, the arts programme of the world’s largest laboratory for particle physics, was created to explore the notions of creativity, human ingenuity and curiosity. The Collide residency programme was established to foster networks with international organisations in order to open up new connections between art and fundamental science worldwide.

“CERN and its research programmes are a source of inspiration for artistic expression across the world. With the Collide residency, we want to foster stronger links between art, science, and technology and promote the cultural significance and societal impact of fundamental science”, says Charlotte Lindberg Warakaulle, CERN Director for International Relations.

“Over the last nine years, Collide has sought and facilitated opportunities for artists and physicists to push the boundaries of knowledge. In the context of this year’s exceptional circumstances, we are proud and happy to announce a new call in collaboration with Barcelona. Alongside our usual search for new forms of dialogue, we are now calling for proposals that challenge new models of interactions and encounters between disciplines”, says Mónica Bello, Head of Arts at CERN.

“Our collaboration with CERN through the Collide programme is part of the Barcelona public policies on science and research. It seeks to consolidate scientific values such as citizen heritage by strengthening the ties between art and science and promoting the relationship between the scientific, economic, social and artistic fabrics as an essential driver of transformation,” says Joan Subirats, Sixth Deputy Mayor, Director of the Area of Culture, Education, Science and Community of the Barcelona City Council.

Online applications for Collide are open from 27 October until 7 December 2020 and can be submitted here. A jury of experts representing science and culture will select the winning artists who will start their residencies in 2021.