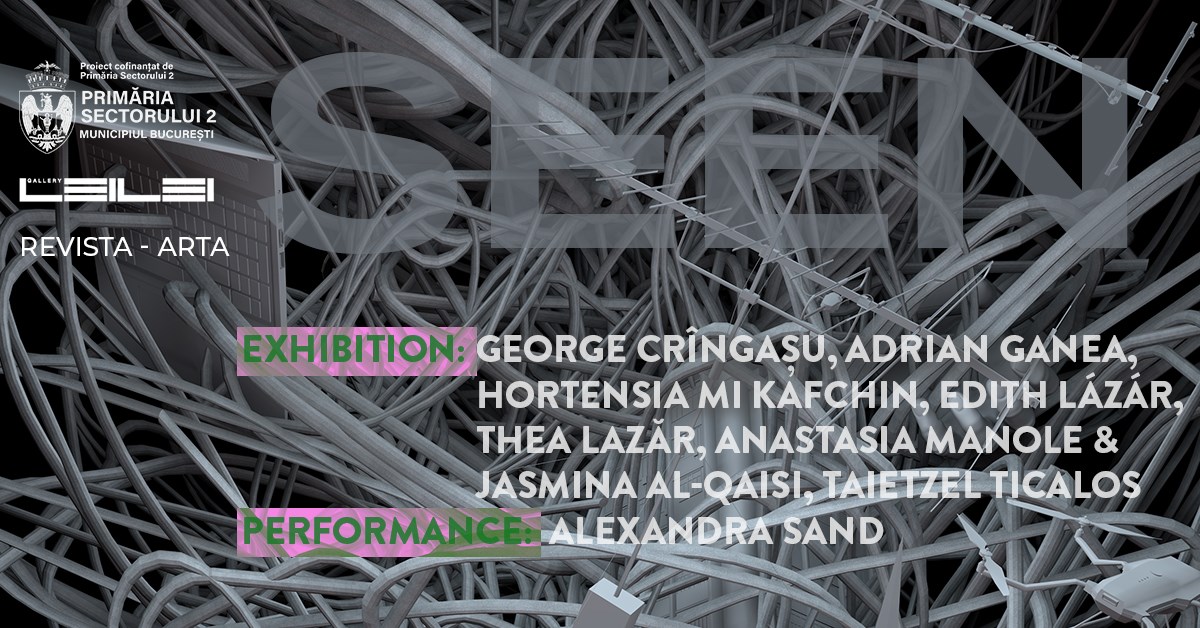 The SEEN multidisciplinary project opens on 15.09.2021 with the digital art exhibition curated by Gabriela Mateescu in partnership with the Romanian digital art promotion platform spam-index.com, where we will see new works by several artists present on our website: George Crîngașu, Adrian Ganea, Edith Lázár, Thea Lazăr, Anastasia Manole and Jasmina Al-Qaisi, taietzel ticalos and a new guest Hortensia Mi Kafchin.
On the opening evening from 18.00 to 19.30, Alexandra Sand, performance and video artist will recreate a series of her performances from all over the world, from the USA to Romania, via Italy and France. She is an Artist focused on making meaningful ‘actions’ and artwork, expressed in performance art, painting, photography and video art and is inviting you to “The Ministry of Truth”!
The performance program is coordinated by Marina Oprea.
Project co-financed by the City Hall of Sector 2.

More about the project:

Exploring new trends in contemporary digital art, where the use of images, videos or texts (sometimes even text generators) in the online environment has been cemented as a creative process, the SEEN project proposes an exhibition of digital art, but also a foray into contemporary performance art and experimental music through a workshop open to teenagers from Sector 2 Bucharest interested in music, completed with a final concert.
SEEN is inscribed in the context of contemporary art from a late post-modernist view, where the theme of originality ends up being questioned and even abandoned. Art history has always sought to label, construct categories and delimit striking individualities into groups, currents, trends – depending on themes, subjects or techniques – as the myth of genius and uniqueness became one of the great obsessions on the cultural scene of the twentieth century. Subsequent nuances closely follow the changes brought about by the technological leap. The 21st century brings to the fore the thematic groups and communities, formed by versatile creators, with multiple interests and directions of artistic development, who collaborate in most often multidisciplinary initiatives. Adapting to the pace of technology, which currently allows them to exchange thoughts and ideas in online groups and communities, and social media, artists receive answers based on the algorithms with which they curate their feed. Uniqueness is no longer a desideratum, on the contrary the resemblance to others, belonging to trends and the ability to continuously adapt to contemporaneity is a standard today.

“SEEN”. A social media landmark. The recipient read the message but did not respond, thus canceling the existence of the sender. The sender is put on hold. Could this be a bridge to the “déjà vu” of today’s artistic creation? An immune response to the daily surplus of information, exposure dosing has become an option for safe space and energy conservation, both in artistic production and in personal space. We have the option of not accessing links and not responding to messages that assault us and that reassures us. What once might have meant annulment is now relativized by the illusion of a postponement. Maybe we’ll do this later.

The exhibition curated by Gabriela Mateescu in partnership with the Romanian digital art promotion platform spam-index.com will present new works by artists present on the eponymous site: George Crîngașu, Adrian Ganea, Edith Lázár, Thea Lazăr, Anastasia Manole, taietzel ticalos and a new guest Hortensia Mi Kafchin, known not only for her metaphysical painting but also for her interest in digital art.

Alexandra Sand, Florin Flueraș, Raluca Croitoru have prepared three performance art courts, which will be presented during the opening, on September 15, but also at the White Night of the Galleries, between October 15-16. And the project will be closed by the Aural Eye Group with a 3D mapping and color show in the gallery, along with a sound performance by Diana Miron, Laurențiu Coțac and Outis Quartet. The concert will conclude a series of experimental music workshops dedicated to teenagers. Some of the young students will contribute to the final concert – a performative sound installation built on different contemporary vocal, instrumental and improvisation techniques.